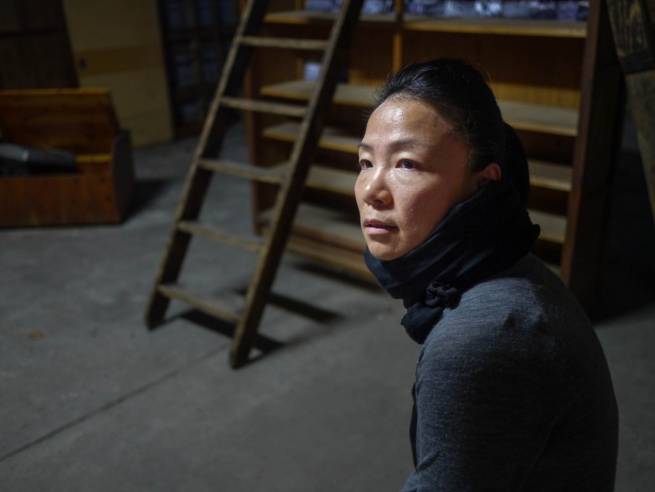 Nana’s plan was to create a “souvenir from Aso,” and her work continued on this theme. She had studied in Japan before, and her understanding and familiarity with Japanese culture played a large part in her work.

Nana placed a number of traditional Japanese household items on rice spread out over the floor as a way to illustrate the historical lifestyles of those living in Aso. The lighting was effective in creating an atmosphere like something out of a folktale, and the piece told the story of the people, places, and things she experienced during her residency.

While senninbari (belt with 1000 stitches in it, used as amulets by soldiers) is a rather dark motif for Japanese people, by having local housewives, the owner of her residency home, etc., stitch a sennninbari together, the senninbari becomes a medium for looking back at the new relationships created. The overall exhibit is a poetic interpretation of the artist’s time during the residency.

Now active in the arts in Germany

View the embedded image gallery online at:
https://asoart.com/en/nana-heim-kwon.html#sigProIde9dfcdebda
back to top